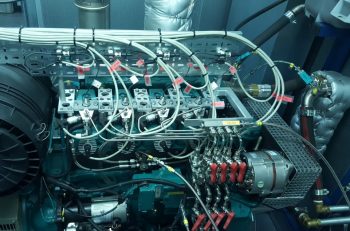 BTG has modified two compression-ignition engines to develop this application, viz. a one-cylinder and a four-cylinder prototype. Initial work was done with the 1-cylinder engine which has the advantage that only 1 fuel injection system needs to be constructed and installed. More recently, the modification of the four cylinder engine started which can be seen as a prototype for a commercial size CHP system.

The original 1-cylinder CI-engine, which has been adapted to run on bio-liquids including pyrolysis oil (see www.bioliquids-chp.eu). Obviously, some modifications are needed to run the engine on pyrolysis oil, and the most important one concerns the fuel injection pump and fuel injector; both have been made from a special stainless steel. 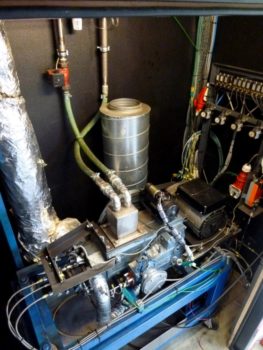 The new 4 cylinder engine prototype is based on the Weichai 226B engine, and the complete gen-set has been assembled and supplied by ABATO Motoren BV, the Netherlands. Subsequently, the unit has been modified by BTG to enable FPBO fueling. Four corrosion resistant fuel pumps and fuel injectors have been constructed in-house. The fuel pump is a two-stage system meaning that the original fuel pump is driving a 2nd fuel pump. The latter pump is connected to the fuel injector, and direct contact of FPBO with original parts of the engine is avoided. To overcome the poor ignition of FPBO the incoming air can be preheated; the compression ratio is kept to the original value of 18.

The engine is started on diesel, and subsequently the inlet air heater is switched on. If the engine is running smoothly and stable the fuel type is switched to rinsing liquid (ethanol or butanol) and engine will run for 5 or 10 minutes on this fuel. Finally, the switch is made to FPBO. So far all tests have been carried out with FPBO containing 20 wt% ethanol. The FPBO was produced by the Empyro plant from woody biomass.

The major modification to the engine concerns the fuel feeding pumps and fuel injectors. To evaluate the new components their performance has been compared to the standard ones. Initially, reference runs have been carried out with diesel and the standard fuel pumps and injectors. Next, only the four fuel pumps were replaced with the modified fuel pumps, and the test runs were repeated with diesel as fuel. Finally, the new fuel injectors were installed and the same tests were carried out again. Tests were carried out at different engine loads (up to 20 kWe) and different air inlet temperatures (50 – 200 °C). The new system leads to a lower NOx content probably due to some delay in the fuel injection caused by the indirect pump system. A small change in the fuel injection timing might be implemented to get similar performance.

The fully modified 4 cylinder system was tested with different fuels including diesel, butanol, ethanol and FPBO. Obviously, due to the lower heating value the consumption of FPBO will be the highest, and the specific fuel consumption will decrease with increasing load.

Besides pure pyrolysis oil, a number of upgrading techniques have been applied to improve the properties of pyrolysis oil, like blending, hydrotreatment, emulsification and esterification. All these ‘upgraded’ pyrolysis liquids have been tested in the engine. Generally, the upgraded liquids were easier to ignite resulting in lower CO emissions and higher NOx, whereas the effect on overall efficiency was less pronounced. However, the liquids remained acidic, and therefore a modified injection system will still be required in all cases.

Long-term testing of pyrolysis oil fuelling will become necessary. CO emissions and pyrolysis oil fuel consumption were followed for a period of 40 h without a clear change in engine performance and emissions. Obviously, for further development and commercialization real long duration testing will be important (> 400 h).

In summary, it can be concluded that the 4 cylinder engine has successfully been modified to enable FPBO fueling. In 2017/2018 an extensive test program will be carried out to continue the development.

Engine development and testing by Wärtsilä and VTT

The first work on using pyrolysis liquid in diesel engines was carried out in Finland by VTT and Wärtsilä. Engine performance and emissions were studied in a 4.8 kW single-cylinder test engine, in a 60 kWe four-cylinder Valmet 420 DS-engine and in a 410 kW Vasa 18V32 engine using one of its 18 cylinders on pyrolysis liquid. It was observed that:

Wärtsilä’s 1.5 MWe medium-speed diesel power plant was modified for pyrolysis liquid use based on the experience gained in the earlier studies. A pyrolysis liquid feeding tank and feeding unit was constructed. The injection rate – injection system had been developed to 1450 bar and less than 30° injection period (6.7 ms) using the extreme fuel properties of 15 MJ/kg heating value and 1.2 kg/L density. Handling, quality control, feeding, and behaviour of a large amount (100 tonnes) of pyrolysis liquid were studied. The main results were as follows:

Wärtsilä stopped the development work mainly due to poor quality (i.e. high solids content) of pyrolysis liquids of that time.

Engine development and testing at Pytec 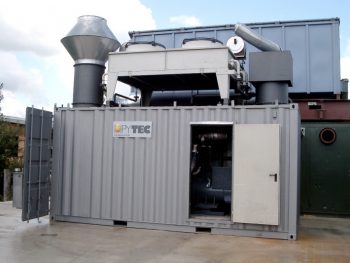 German company Pytec is developing CHP systems based on the use of fast pyrolysis oil in diesel engines. Their fast pyrolysis process is applying the so-called ablative pyrolysis principle. Instead of a heat carrier, the biomass is contacted with a hot metal surface. The bio-oil is combusted in a modified 450 kWe diesel engine (Mercedes-Benz).

Prior to injection the oil is preheated to 70°C to lower its viscosity and about 4% of diesel fuel was mixed with the pyrolysis oil to ensure lubrication and smooth combustion. The engine was started on diesel and then the bio-oil portion was slowly increased to 96%. In total 10 h of operation have been achieved. On average 120 l/h of bio-oil were consumed achieving an electrical output of 305 kWe and a reduction in exhaust gas temperature of 150°C compared to diesel combustion (derating).