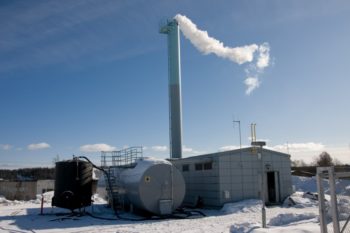 Bubbling fluid beds, usually referred to as just fluid beds as opposed to circulating fluid beds (see below) have the advantages of a well understood technology that is simple in construction and operation, good temperature control and very efficient heat transfer to biomass particles due to high solids density.  A typical configuration is shown below with electrostatic precipitators that are more widely used in laboratory systems.  Commercial plants may try to rely on a series of collection stages including de-misters although aerosol capture is notoriously difficult. 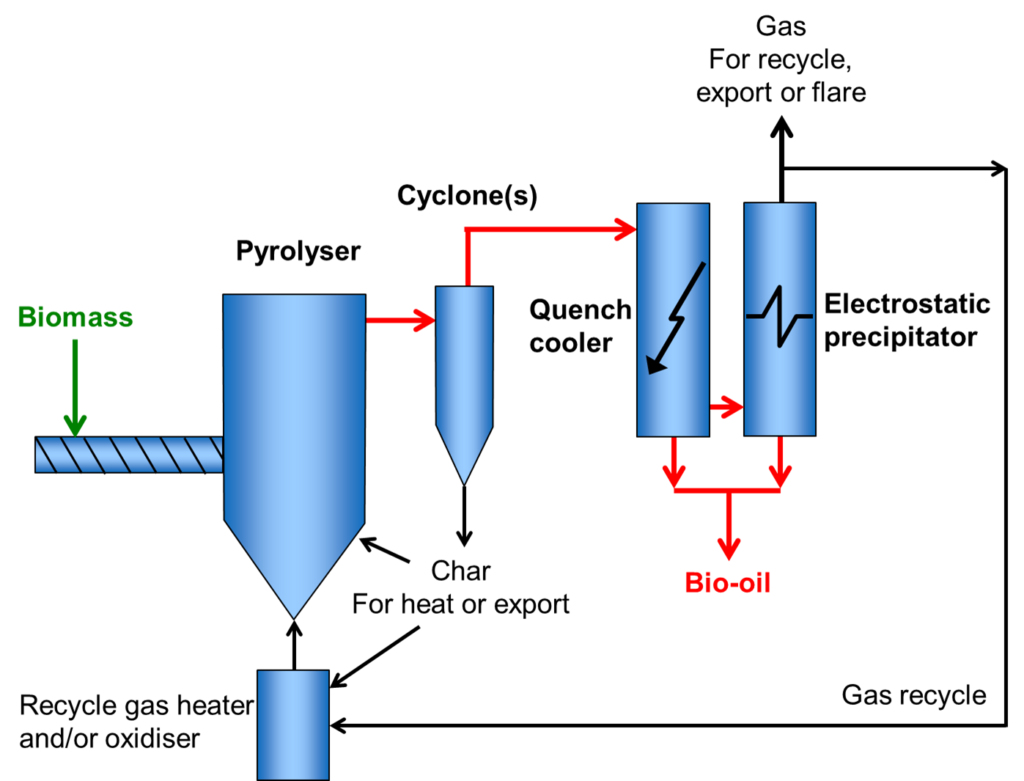 Heating can be achieved in a variety of ways as shown in the figure below and scaling is well understood.  However, heat transfer to bed at large-scales of operation has to be considered carefully due to scale-up limitations of different methods of heat transfer. 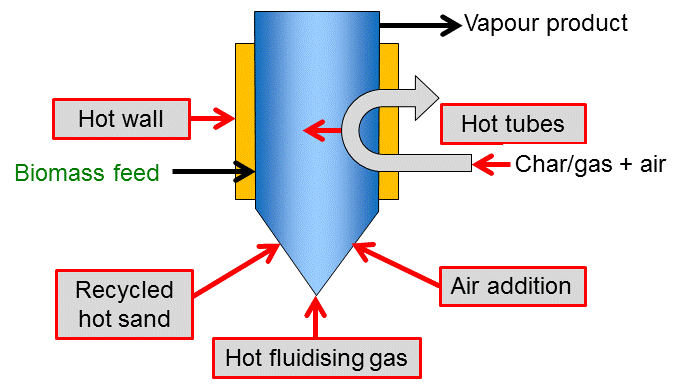 Methods of heat transfer to a pyrolysis reactor.

Fluid bed pyrolysers give good and consistent performance with high liquid yields of typically 70-75%wt. from wood on a dry feed basis.  Small biomass particle sizes of less than 2-3 mm are needed to achieve high biomass heating rates, and the rate of particle heating is usually the rate limiting step.

Residence time of solids and vapours is controlled by the fluidising gas flow rate and is higher for char than for vapours.  As char acts as an effective vapour cracking catalyst at fast pyrolysis reaction temperatures, rapid and effective char separation/elutriation is important. This is usually achieved by ejection and entrainment followed by separation in one or more cyclones so careful design of sand and biomass/char hydrodynamics is important.

Circulating fluid bed (CFB) and transported bed reactor systems have many of the features of bubbling beds described above except that the residence time for the char is almost the same as for vapours and gas and char is more attrited due to the higher gas velocities which can lead to higher char contents in the collected bio-oil.  An added advantage is that CFBs are suitable for very large throughputs even though the hydrodynamics are more complex – this technology is widely used at very high throughputs in the petroleum and petrochemical industry.  Heat supply is usually from recirculation of heated sand from a secondary char combustor, which can be either a bubbling or circulating fluid bed.  In this respect the process is similar to a twin fluid bed gasifier except that the reactor (pyrolyser) temperature is much lower and the closely integrated char combustion in a second reactor requires careful control to ensure that the temperature and heat flux match the process and feed requirements.  One of the unproven areas is heat transfer at large-scales of throughput.

The rotating cone reactor has many similarities except that the sand and biomass transport is effected by centrifugal forces operating in a rotating cone. 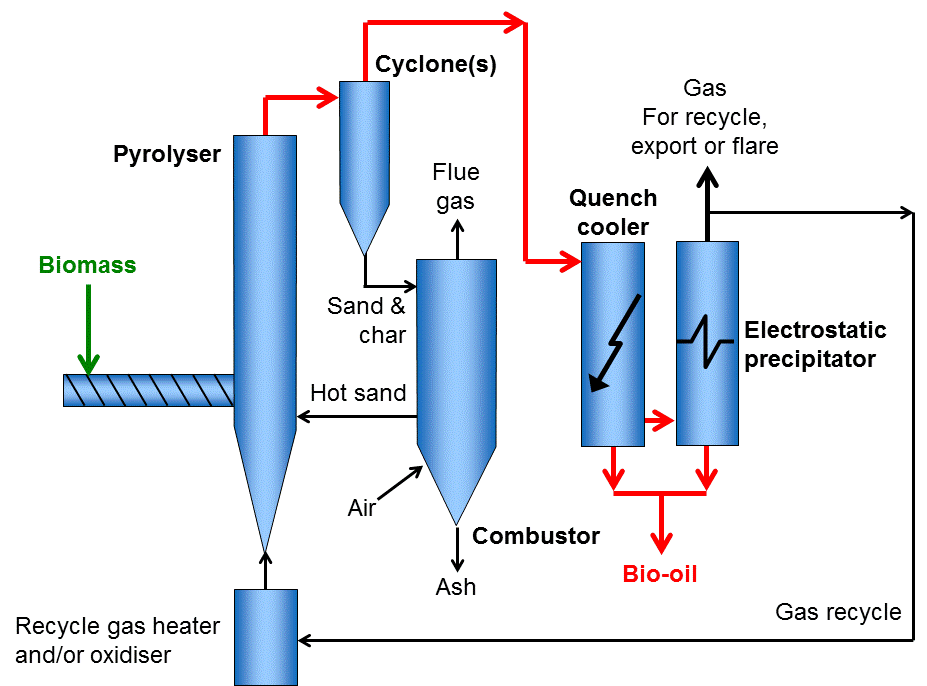 Ablative pyrolysis is substantially different in concept compared to the other methods of fast pyrolysis.  In all these other methods, the rate of reaction is limited by the rate of heat transfer through a biomass particle, which is why small particles are required.  The mode of reaction in ablative pyrolysis is analogous to melting butter in a frying pan, when the rate of melting can be significantly enhanced by pressing down and moving the butter over the heated pan surface.  In ablative pyrolysis heat is transferred from the hot reactor wall to “melt” wood that is in contact with it under pressure.  The pyrolysis front thus moves unidirectionally through the biomass particle.  As the wood is mechanically moved away, the residual oil film both provides lubrication for successive biomass particles and also rapidly evaporates to give pyrolysis vapours for collection in the same way as other processes.  The rate of reaction is strongly influenced by pressure, the relative velocity of wood on the heat exchange surface and the reactor surface temperature.  The key features of ablative pyrolysis are therefore as follows:

As reaction rates are not limited by heat transfer through the biomass particle large particles can be used, and in principle there is no upper limit to the size that can be processed.  The process in fact is limited by the rate of heat supply to the reactor rather than the rate of heat absorption by the pyrolysing biomass as in other reactors.  There is no requirement for inert gas, so the processing equipment is smaller, and the reaction system is thus more intensive.  However the process is surface area controlled so scaling is more costly and the reactor is mechanically driven so is thus more complex. 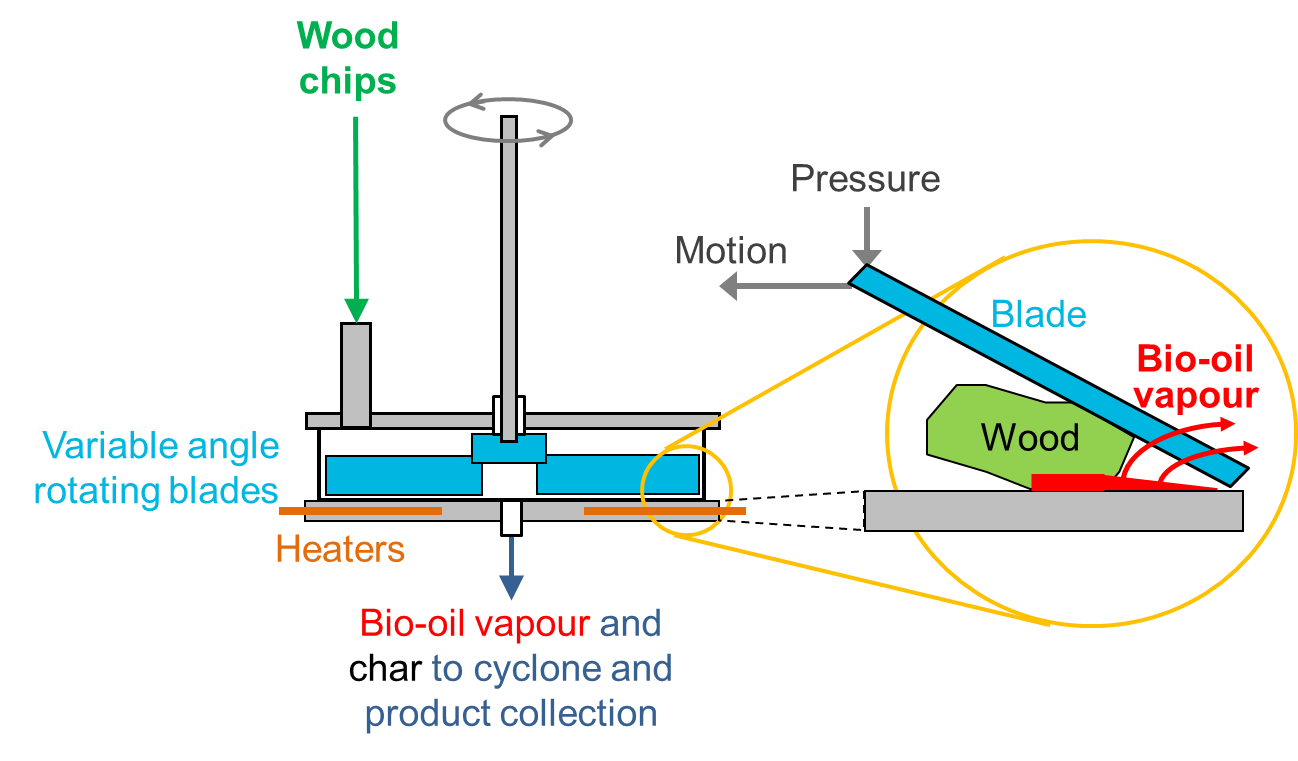 A summary of some key features of fast pyrolysis reactor systems is shown in the table below, which identifies the more favourable and less favourable features of each type of reactor.