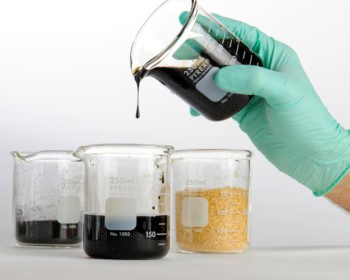 Crude pyrolysis oil is dark brown and approximates to biomass in elemental composition. The liquid is formed by fast pyrolysis, which is rapidly heating and quenching biomass in an inert or oxygen deficient atmosphere. This freezes the intermediate decomposition products of hemicellulose, cellulose and lignin. The liquid thus contains many reactive species, which contribute to its unusual attributes.

Pyrolysis oil is composed of a very complex mixture of oxygenated hydrocarbons with an appreciable proportion of water from both the original moisture and reaction product. The amount of water depends on how the pyrolysis oil was produced but is typically in the range of 20 – 30 wt-%. Solid char may also be present. Pyrolysis oil can be considered a micro-emulsion in which the continuous phase is an aqueous solution of holocellulose decomposition products, that stabilizes the discontinuous phase of pyrolytic lignin macro-molecules through mechanisms such as hydrogen bonding. Some important characteristics of this liquid are summarized in the table below.

Typical properties and characteristics of pyrolysis liquids derived from biomass versus a fuel oil.

* Note: Measurement of flash point of bio-oil is problematic due to water evaporation and difficulty in sustaining flame.

Biomass pyrolysis oil contains several hundred different chemicals in widely varying proportions, ranging from formaldehyde and acetic acid to complex high molecular weight phenols, anhydrosugars and other oligosaccharides. The liquid has a distinctive odor – an acrid smoky smell, which can irritate the eyes if exposed for a prolonged period to the liquids. The cause of this smell is the low molecular weight aldehydes and acids present in the oil. The liquid is corrosive, and should be handled with care as some biomass pyrolysis oils are suspected of causing genetic defects and cancer.

As the pyrolysis oil constitutes of intermediate, reactive decomposition products, it is generally not stable with time. While some bio-oils have been successfully stored for several years in normal storage conditions, it does change slowly with time, most noticeably there is a gradual increase in viscosity. The aging is caused by condensation reactions of reactive components and can also lead to phase separation of the oil. Furthermore, pyrolysis liquids cannot be completely re-vaporized once they have been recovered from the exit gas of pyrolysis.  If the liquid is heated to 100 °C or more, it rapidly reacts and eventually produces a solid residue of around 50 wt% of the original liquid and some distillate containing volatile organic compounds and water.

Pyrolysis liquids can tolerate the addition of some water, but there is a limit to the amount of water which can be added to the liquid before phase separation occurs, in other words the liquid cannot be dissolved in water.  It is mostly miscible with polar solvents such as methanol, acetone, etc. but immiscible with petroleum oils.

The density of the liquid is very high at around 1.2 g/ml compared to light fuel oil at around 0.85 g/ml.  This means that the liquid has about 42% of the energy content of fuel oil on a weight basis, but 61% on a volumetric basis.  This has implications on the design and specification of equipment such as pumps and atomizers in boilers and engines.

The complex mixture of oxygenated compounds that constitutes the pyrolysis oil provides a challenge for its utilization, but in some instances also a potential. There are many suggested application areas of biomass pyrolysis oil, and the quality parameters of course need to be defined for each application. The bio-oil can be used as a substitution for conventional fuel oils in stationary applications; the ASTM D7544 standard regulates the specifications of pyrolysis oil when used as a liquid biofuel. Other areas of potential are upgrading of the pyrolysis oil in refinery infrastructure to a hydrocarbon fuel, or to use the pyrolysis oil for production of chemicals and materials. Read more about bio-oil applications here (link).