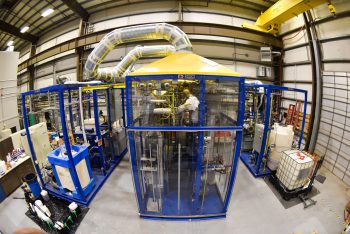 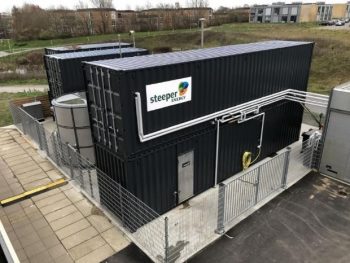 Solvent Liquefaction is the thermochemical conversion of biomass into liquid fuels and intermediates by processing a biomass slurry in a hot, pressurized solvent.  The product is called bio-crude and it is different from bio-oil.

This occurs through the mechanism of converting the polymeric content of the solid biomass into primarily liquid components. Thus, they are essentially pyrolysis of biomass in a liquid solvent environment, which is often but not limited to the thermally liquefied product itself. 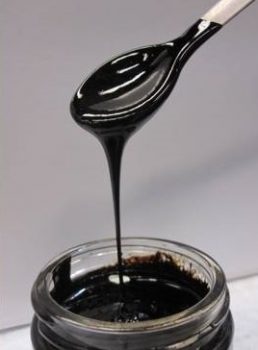 These approaches are considered for converting wet biomass streams, where water removal may be considered cost prohibitive, and to leverage ionic reaction conditions as part of the thermolytic chemistry by maintaining conditions in which a liquid solvent is the primary reaction media.

Solvent processing conditions can be divided into 3 different modes. Low temperature processing is known as solvent carbonization, performed below 250C in order to form a solid char material for the purposes of a solid fuel material. Intermediate temperature processing is referred to as liquefaction, largely performed between 250C to 370C for the production of a liquid fuel or intermediate. Finally, at high temperatures, solvent gasification can occur above 400C where the biomass components can be converted into noncondensible gases such that the mobile phase solvent is not consumed during the process.

While catalysts are inevitably present in the form of alkali and the ionic solvent, some forms of liquefaction involve deliberate addition of additional catalysts in order to encourage the deopolymerziation reactions or favor specific products.

The product of solvent liquefaction is commonly known as Bio-crude, and when compared to bio-oil from fast pyrolysis it is typically of lower oxygen content, lower water content, more thermally stable, often higher viscosity, and can often be less dense than bio-oils. However, while lower in oxygen content that bio-oil, bio-crude does not resemble petroleum crudes in that it still contains significantly more oxygen and the chemical structure is still somewhwat reminiscent of the biomass starting material.

Historically, hydrothermal liquefaction gained attention in the 1970s and 1980s in continuous processing development efforts at Lawrence Berkeley Laboratory (Schaleger et al., 1982) and the Albany Biomass Liquefaction Experimental Facility (Thigpen, 1982), both in the U.S., and the Hydrothermal Upgrading (HTU) plant (Goudriaan et al., 2008) in the Netherlands, was recently described by Elliott (Elliott, 2011).

In the last decade, solvent liquefaction technologies have undergone a resurgence and have been the focus of additional laboratory research and work towards commercialization.